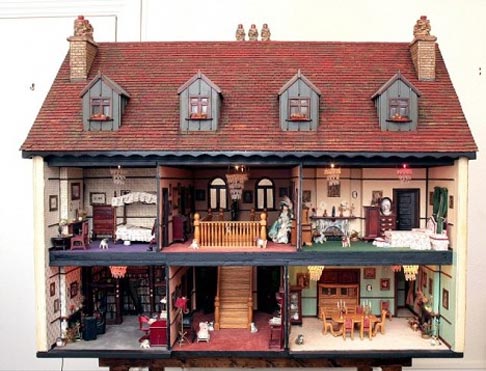 God is like the owner of a dollhouse, the kind in the picture above, where there is no facade, and the owner can see all the rooms in the house at once and furnishes each room as He likes, and places the doll in whatever room He chooses.

For you who believe, your heart and your mind can be imagined as one big dollhouse with many many rooms. As the occupant in the dollhouse, you only see your immediate surrounds, the patterned wallpaper in the living room, or the stove in the kitchen. Such a dollhouse has no doors linking the rooms, and you can’t see if the dining table has been laid for dinner or if your old high school friends are having tea in the study without you. You only see the room you are in, and the walls surround you, floor and ceiling, living as you are in Time.

Early this year, I went through a difficult phase. The good thing is that Time, they say, assuages all wounds. Still, I remember the rawness of my experience. To borrow from British author Douglas Adams, it was a long dark teatime of the soul, a crisis of faith, for it was impossible for me to see even the shadow of the saving hand of God then.

It was entirely my fault. At the time, the room was a bright, airy one, and I fairly danced and sang in it. But gradually it began losing light, and over time, the walls started closing in. As the room shrank, my thoughts followed suit. They seemed to be on a retracting leash, no longer able to wander over vast plains of thought and ideas as freely as it used to.

I knew I had to leave that room, but there was no door. I tried to escape, making resolutions that I broke many times over. I looked to the owner of the dollhouse for help, pleaded even, but apparently he had peered deep into my heart and seen something there that caused him to remain silent.

It was Lent, the season leading to Good Friday and Easter, and it is a popular practice among believers to give up something one likes (anything from TV favourites to Farmville) during the 40 days before Easter Sunday. I embarked on a journey, but I soon realized these were merely things I *thought* I cherished the most. Having wrong goals meant I was blindly headed for failure. Instead of the anticipated sprint to victory, Day 35 of the 40 days of Lent saw me limping across the finish line, emptied, exhausted spiritually and emotionally.

My surrender was absolute, and the dollhouse owner saw a broken spirit and a contrite heart which he did not despise. Now given my absolute whole-hearted permission, he lifted me out of the room, grown dark and suffocating, and put me into a new room, meadow-wide with a high blue ceiling. I wonder that if there had been a door I might have escaped sooner and suffered less. But what kind of room would it lead to if the door allowed some of the old air to pollute the new space?

All I could feel was a sense of liberation and release. I wondered why I ever thought the old room was where I wanted to be, why my resolve had been so weak to remain there, when there was all this space and blue sky to explore. But until you’re brought to a new place, you would never want to leave the old and familiar because you would never know what you’re missing.

This sheds some light on the meaning behind this verse in the Book of John, when our Lord said to His disciples the night He was betrayed, just hours before being nailed to the cross:

In My Father’s house are many mansions;
if it were not so, I would have told you. I go to prepare a place for you. John 14:2

The context of this verse throws Christ’s torment into great relief against my own trials, which appears almost trivial.

His was truly a dark, dark night of soul, when everything in him fought against surrendering to the brutal Roman authorities and a torturous, humiliating, slow death. He reassured his band of brothers that in his leaving he wasn’t abandoning them, but rather, he was going ahead to prepare something better beyond. In the face of impending pain and great suffering, he was thinking of the people he loved the most.

The many rooms and mansions can be interpreted, from my experience, of allowing the dollhouse owner to take you, upon submission of our will, through the doorways *he* has opened and the rooms he has prepared for us, rather than us determining where to go. Sometimes we go gladly, sometimes not. But in relinquishing control, we enter into a freedom that is unimaginable and only realized when we obey.

All I can say is, please press PLAY now. Though I’ve shared this video below in a different post which you can read here, songs like this one are magical in their ability to transform and express the way we feel at any given time.

In this new space, I’ve seen rest and restoration, and though it is early days, the small milestones that have occurred spell the promise of good things to come from the hand of the dollhouse owner.

Have you gone through something like this before? What is your take on it? What did you learn about yourself? About life? Do share your thoughts and feelings in the Comments below. I’d love to hear them.

If you haven’t already, subscribe to Don’t Dream It’s Over now. It’s an easy way to get instant updates fresh off the (Word)press and into your e-mail inbox immediately. No need to click your way to my blog. Best of all, it’s free. In the column on your right, you’ll see “Get Ming’s Posts Via Email.” Enter your e-mail address in the box. You will then get a confirmation e-mail. (Don’t worry, I hate spam mail as much as you do, and don’t do it!)

« What Makes A Good Photo
My Favorite Word »