Home › Good Food › Brains and Prawn: How to Cook the Mekong River Prawn

Brains and Prawn: How to Cook the Mekong River Prawn

Every dish tells a story and this one is kinda interesting.

This is probably my first post on food. I figure with the likes of Nigel Slater and other great gourmands and foodies ruling the food blogosphere, why go in where angels fear to tread?

But the story is everything. So here goes.

The Mekong River prawn is so big you might think it was a small lobster for its long pincers and fan-shaped tail. The first time I tried it was in Phnom Penh. Our hosts brought us to a well-known local restaurant where it was served grilled.

This was how it was served in Phnom Penh. Yes, it tasted good to be true.

The meat was tender and tasted majestically of the fresh waters that run through the largest river in Southeast Asia, running as it does through China, Myanmar, Laos, Thailand, Cambodia and Vietnam.

The surprise though lay inside the prawn’s head. So big that my hand goes around it nicely, the head has golden-orange yolk called the tamale that you scoop or pour out onto white rice. It is sweet and salty and rich; it is the sea-nectar of the gods.

About two weeks ago, Andre’s Cambodian patient hand-carried 30 giant Mekong River prawns in a large styrofoam box packed with ice from Phnom Penh into Singapore. The prawns were given to Andre as a gift.

In our kitchen, the prawns were dutifully put into the freezer.

Aren't they gorgeous? My coffee mug is beside the monsters for a sense of scale.

The next night, as the Wednesday Night Runners gathered for dinner, the prawns inevitably came up for discussion. How best to cook them? Grill? Saute? Would you like some?

We have alot. And so several people went home that night benefactors of the Cambodian patient.

Like the three little pigs who each built different houses, these are the variations on how the prawns were cooked, eaten and enjoyed.

In the final analysis, preparing the prawns was an experience in itself. Any prawn after this is going to look like shrimp. 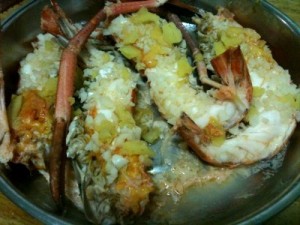 The first little piggy sauted it Chinese style. Pour on the garlic and ginger please. 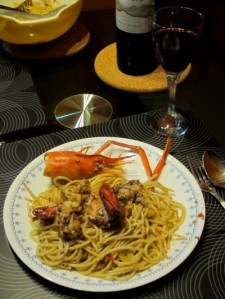 The second little piggy flambed his for finesse. Served with spaghetti aglio olio, it was scrumptious!

Baked with herbs and olive oil. Headless though. This was a nervous third piggy. What a miss, piggy.

The best for last: The prawns were baked in their shells. No seasoning added. The prize was the golden treasure inside the heads. You could only eat two heads before the richness set in.

« On Design: Mixing The Past with The Present
Coming Back to What’s Familiar »