Coming Back to What’s Familiar

Late evening and the moonlight silverplates the leaves of trees on the street. It’s the kind of night which is solitary, lonesome even, but it is alive with the thoughts of the day swirling like the stars in the deepening night sky. 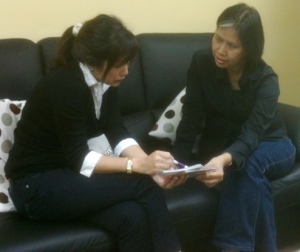 Discussing Cat's playlist for the recording of our chat for Heart Tunes on 105.5 FM (to be launched in March 2011)

That’s what singer Cat Ong’s voice is like. It has a lambent quality, softly bright, gently radiant. It has a lushness, a tranquility, that is the envy of young vocalists here. It is much like being led beside still waters.

Click to listen to Cat’s amazing song, Bread Of Life

Well, more. The Singapore musician has sung for more than 25 years in the local entertainment scene and actively supported young, aspiring bands and musicians by showcasing their works at public venues. She’s performed for international heads of state, including US President George Bush (the first one). Her resume, if she had one, would reveal the depth and breadth of a long career in the music scene where Cat performed in the top clubs in Singapore’s heyday of live entertainment in the 1980s and 1990s.

At age 19, Cat was immersed in the wide and wild world of live entertainment, where midnight is the rush hour, alcohol the caffeine, and music took centrestage against a backdrop of promiscuity and pill-popping. In this upside-down world with downside-up morals, Cat struggled to find her identity.

She battled depression, used alcohol to boost her self-esteem, even attempted suicide. At the end of her rope, she responded to a friend and fellow musician’s invitation to visit his church. There and surrounded by the genuine love and kindness of friends, she experienced the reality of God and His redemptive love. She has not looked back since.

Cat’s debut album Coming Home is part-autobiographical in nature. It describes a journey of faith which led her to discover a newfound identity rooted in her faith in our Lord. The themes of forgiveness and love, particularly Divine love, thread the songs, all original compositions, together.

In my chat with her for a soon-to-be-launched radio program (a link to the podcasts coming soon), I found a lively persona before me, confident, kind and unassuming. Ask her a question and her answers (more than one) come forth in measured tones, deliberate and thoughtful. 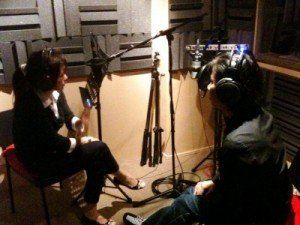 In the Oops! Asia studio for our recorded chat

In particular, her answers to my questions about her perspective on the music scene, on holding out for something of value instead of compromising for 15 minutes of narrow fame, come filtered through a lens convexed and shaped by the lessons of life, paid for with heartache, pain, and not a few soul-destroying moments.

When you listen to her songs, the lens slowly changes into a mirror and you see a reflection of yourself. Her singing voice is like leaving a closed room and finding yourself in a wide meadow, full of sunshine and blue sky. You find a kind of freedom, a sense of liberation and release.

Such is the transformative power of her music.

I think I made a friend today also, and for that I give thanks.

The title of this post, Coming Back to What’s Familiar, refers to how I felt chatting to Cat as we recorded her interview for the upcoming radio program, Heart Tunes, on 105.5 FM. Details later. The sound engineer and the digital recorder were my new pen and notebook, but it felt so good to once again be talking to an artiste about her craft, her work, her thoughts.

Do check out Cat Ong Music, her Facebook Page. You can hear more of her songs here.

Do leave a comment and share what you think of her songs and how they make you feel.

« Brains and Prawn: How to Cook the Mekong River Prawn
How To Get On To The Cover Of Time Magazine »